1. Why is BCC the original chain of BCH?

When the BCH (Bitcoin Cash) was hard forked on November 13, 2017, two chains were formed, and the chain supported by the original version was the original chain.

After the birth of Bitcoin cash, the bitcoin cash in the wallet Bitcoin ABC version 0.14.6 is referred to as BCC, and the version of this abbreviation continues to Bitcoin ABC 0.15.1.

The abbreviation of the 0.16.0 version of the wallet was also renamed BCH, and then the major exchanges renamed Bitcoin cash to BCH.

.1 version of the agreement, and successfully dig a block after 35 hours [Bitcoin ABC development team issued an announcement at the time,

Announced that BCC continued to come out, this announcement was later deleted, but JIHAN WU forwarded the announcement.

At this point, Bitcoin cash is officially forked into two separate chains: 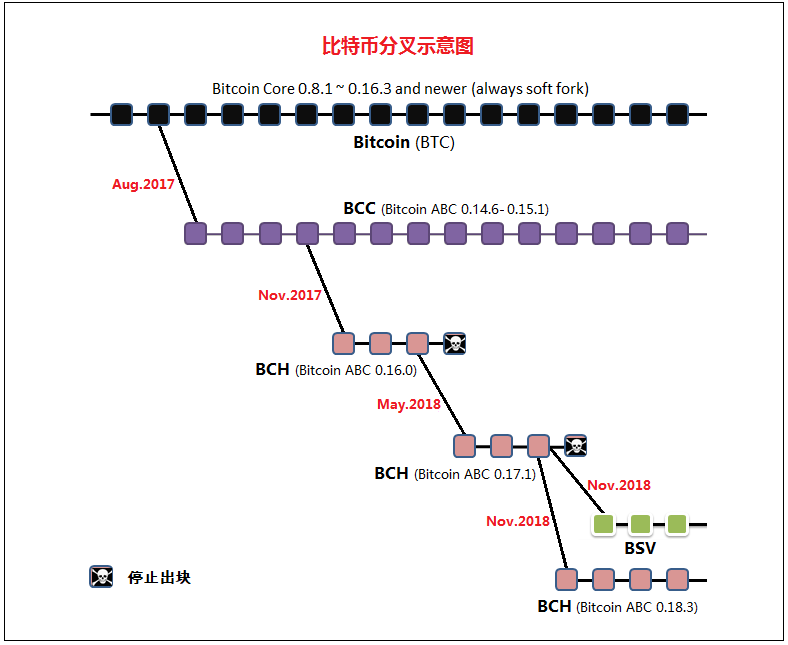 2. Why are the node networks of BCC and BTC, BCH, and BSV interworking?

Because the four adopt similar P2P technology, they can find the other node.

These four nodes can be connected to each other, but each synchronizes its own chain and is incompatible with each other.

On November 13, 2017, Bitcoin cash hard forks were upgraded to Bitcoin ABC 0.16.0. Since then, the short name in the wallet has been changed to BCH, and most miners have turned to BCH (new chain).

On November 13, 2017, the miners who supported the Bitcoin cash chain continued to tap the BCC and slowly excavated 60 blocks within 35 days.

From 2018 to 2019, the BCC chain was unsupported and gradually stopped.

On June 3, 2019, BCC users and miners resumed mining the chain and forming a community.

On June 25, 2019, the miners involved in mining donated 100,000 BCCs and established community foundations, marking the first step for BCC to take the road of communityization.

In July 2019, miners who continued to join mining have completely revived the bitcoin cash chain.

BCC is a "coin" and is a kind of money because the software does not contain consensus.

The code can be modified and upgraded at will, and the "coin" can not be deprived casually. This trait is also the value of Bitcoin.

Without this trait, including Bitcoin, it would become worthless.

* Bitcoin goals should have multiple routes to try to achieve

* There is currently no absolutely correct, great, bright, standard route

* Any route may fail and may succeed. No route is better than any other route before reaching the goal.

* Each route should clearly communicate a clear direction of execution to the developer, which is the first step in accessing the open source ecosystem.

* Blockchain revolution did not happen

6. Why is the consensus of BCC as the original chain weaker than BCH?

Because most people don't know the survival of BCC now.

This is one of the three major doubts in the currency circle (the disappearance of Nakamoto, the DAO event of Ethereum, the truth of the BCC original chain), and the community is conducting research and exploration on this.

BCH's first wallet node software BCHABC uses the BCC logo, which has the longest time, so the community is used to this name.

The name that BCC used before:

BCC (birth name, the first version of the wallet is the symbol BCC)

BCH (partial transaction during August-November 2017 so BCH named it)

BcashClassic (the name of the BTG founder)

Bitcoin Clashic (the name of the overseas twitter live number)

BCL (named by developers after November 2017)

It is unowned, and as the BCC becomes a widely recognized name, it forms its de facto consensus name.

8. Is there any authoritative media coverage of the existence of BCC?

Mainly seen in overseas media, domestic media rarely report independently on the “no project side” project.

bitcoin.com A True Network or Troll? A Look at the “Bitcoin Clashic”